It is undoubted to say that traditional Japanese food has made a critical contribution to Japan’s diverse and unique cuisine. To help you explore Japan’s culinary world, we shall walk you through more than 10 authentic Japanese foods that everyone must try.

1. Japanese Dishes Made With Rice

Sushi is definitely one of the most well-known Japanese foods all over the world. This delicacy is a dish whose steamed rice is seasoned with rice vinegar, then mixed with many other ingredients such as seafood, vegetables, seaweed, and so forth. There are many types of sushi: makizushi (like kimbap from Korea, rice and fillings rolled in seaweed), nigiri sushi (bite-sized sushi rice with toppings of raw fish),… 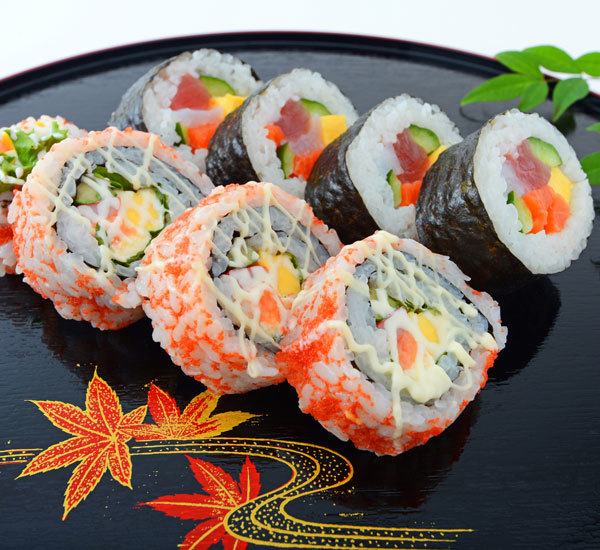 Sushi is definitely one of the most well-known Japanese foods all over the world.

Onigiri is known as triangular or cylindrical – shaped rice balls wrapped in seaweed. The fillings, traditionally, are salmon, tuna with mayonnaise, katsuobushi, and so on. Rice is steamed and sometimes mixed with red bean or other preferred ingredients. Onigiri is a rice ball wrapped in seaweed.

2. Dishes Made From Sea Food

In Japanese, “Unagi”  means “freshwater eel”. Unagi no Kabayaki is a very popular dish that Japanese often eat in summer. The recipe of the dish is quite simple: eel fillets are marinated with sweet soy sauce, sake and other seasonings and then grilled.  Unagi no Kabayaki can be served with hot steamed rice. The dish looks and tastes so good that you must try. Unagi no Kabayaki looks so tasty!

It cannot go without saying that sashimi is an authentic Japanese food. Sashimi is simply sliced raw fish or seafood eaten with soy sauce or wasabi. Some common ingredients are tuna, salmon, mackerel, and so on. The fish in sashimi must be as fresh as possible to make a good taste.

Check out the footage of making sashimi!

Mentaiko is a unique traditional Japanese food as it is made from roe! The fish eggs of cod or pollock is marinated with spicy, salty and savoury seasonings. You can eat mentaiko with steamed rice or ramen noodles. Mentaiko can be also a filling in Onigiri rice ball. Mentaiko is unique as it is made from roe.

Miso soup is a traditional soup that appears in every typical Japanese breakfast. It is a mixture of miso paste and dashi broth. Miso paste is actually fermented soybean with salt and fungus. The flavor of the miso soup depends heavily on the time of fermentation. Red miso (miso paste is fermented for a long time) would give the soup deep and strong flavor. In contrast, white miso (miso paste is fermented in a short period) makes the soup taste sweeter and lighter. When eating miso soup, people often add some toppings such as scallion, tofu, seaweed, …

This video below would give you a clear instruction on how to make miso soup:

Among traditional Japanese dishes, noodles may have the most types, about 7 or 8 varieties of noodles. However, ramen, soba or udon are the most famous for many diners around the world.

This funny video below clarifies the difference among those 3 popular noodles:

Ramen is a kind of wheat noodles in a savory broth (including four main ingredients: miso, salt, soy sauce and pork bone). The toppings are meat and vegetables (seaweed, spring onions, and so on). Ramen is so popular that there are many ramen restaurants not only in Japan but also in many other countries in the world.

Compared to ramen, udon noodles are thicker and straighter. Udon is often served in a simple and clean way, not adding any toppings. The broth of udon is made of curry or light soy sauce, which makes the flavor of udon subtler than that of ramen. There are many types of udon such as “fox udon” (topping is fried tofu), tempura udon, chikara udon (“power udon”, topping is grilled mocha),…

Soba is a Japanese noodle made from buckwheat flour. Therefore, soba tastes slightly nutty and it tends to be brittle. Unlike udon, the soba noodles are as thin as spaghetti. Soba can be served in hot or cold soup with the additive of garlic and sesame, making the flavor stronger. The toppings are onions, scallions, seaweed, wasabi and so on.

Okonomiyaki is truly a traditional Japanese food for street food lovers. It is a pancake, also known as “Japanese pizza” made with wheat flour base, eggs and shredded cabbage. As its name suggested (“okonomi” means “what you like” and “yaki” means “fried”), okonomiyaki is topped with a wide variety of whatever condiments that the diners like. Okonomiyaki is a popular street vendor food in Japan.

There are two main types of Okonomiyaki: Kansai and Hiroshima. The Kansai or Osaka style is the more popular in Japan. The batter is mixed with shredded cabbage, eggs, dashi,… and then grilled. Then the cook will put whatever ingredients you like on the top (often they are meat, squid, shrimp, cheese, mochi, vegetables,…). With Hiroshima style Okonomiyaki, there are many layers (rather than a mixture) including batter, then cabbage, meat, seafood (optional and preferred) and cheese.

Takoyaki is a ball-shaped appetizer made of wheat flour then cooked in a pan. The fillings inside are typically minced octopus, pickled ginger and scallions. The takoyaki is then sprinkled with salty takoyaki sauce, mayonnaise and green laver (seaweed). For your information, takoyaki is a traditional Japanese food originated from Osaka. It will go well with alcoholic drinks (beer, wine,…).

Sukiyaki is a traditional Japanese hot pot often enjoyed in the winter. The name “Sukiyaki” means “cooks whatever you like” so you can add many ingredients into the hot pot: sukiyaki broth, then beef, different types of vegetables (mushrooms, cabbage, potatoes, …), noodles, and so on. The name “Sukiyaki” means “cooks whatever you like” so you can add many ingredients into the hot pot.

Like sukiyaki, oden is also one of the best Japanese dishes to enjoy in winter. Diners will add a variety of vegetables, mochi, boiled eggs, tofu,… into a broth (soy sauce and dashi) in a large hot pot at the center of a dining table. Oden is very popular not only in winter but all year round. There are many hot pot restaurants in the country and they are occupied all seasons in the year. Oden is one of the best Japanese dishes to enjoy in winter.

Japanese cuisine is so diverse that there are hundreds of traditional dishes that you should try, ranging from savoury foods like tempura, shabu shabu,… to sweet food like mochi cake, kitkat,…. . Traditional Japanese food would definitely never make diners all around the world disappointed. Shabu Shabu Recipe: Way To The Quintessence of Japanese Cuisine